You are here: Home1 / Events2 / Dam dreams and river rewilding: Ideals in dispute3

Contestations around water infrastructures shape many debates around water governance and cut across our river research projects. The 7th riverside meeting was a fruitful space to share ideas on how water infrastructures, which embody specific visions and projects about development, can trigger diverse social movements and forms of resistance in different geographies.

The debate around “Dams, Rivers and Rewilding Dams” took place on 30 August 2022, at the Impulse Speakers Corner of Wageningen University. Dr. Barbara Hogenboom opened the session with a presentation of two books by postdoc researchers, Dr. Juan Hidalgo and Dr. Bibiana Duarte. Both authors analyse the power-water-technology nexus and how utopian ideas seek to order society through water management. Hidalgo’s work focused on three dams built in Ecuador in different political moments: developmentalism, neoliberalism, and progressivism. His work sought to unravel the impact of power dynamics on design decisions and how continuities and discontinuities in political dynamics affected the development of the dams. Duarte’s work explored how utopian dreams impose a universalising world-view, which in the two cases she investigated (Guadalhorce river in Spain and Middle Magdalena in Colombia) resulted in a rupture of the social fabric and large dispossession of local communities. These books triggered diverse questions: how to address uneven interests and positions regarding water infrastructures within local communities and how to position ourselves as researchers in such a myriad of interests and perspectives?

The second speaker of the session was Frank Westerman, who presented his recently published work “Too true to be good”. His book talks about the removal of two hydroelectric dams on the Selune river, namely, the Vezins (36 meters) and the La Roche Qui Boit (16 meters), within the re-wilding effort to have a free-flowing river and restore the riparian ecosystem according to the provisions of the EU Water Framework Directive. The author reflected on how the removal of these dams encountered robust social resistance from residents of the Sélune and Vezins. They have lived around the reservoirs all their life and disagreed with such massive intervention in their villages. Citizens organised themselves in a group called “Amis des barrier”, to challenge the dam removal operation, arguing that the damns were not only part of their landscape but also a key source of income. Westerman also adopted a critical position toward the dam removal initiative, opening the debate about who has the authority to define what nature is and how to restore the landscape to its previous state if there are no memories of how it looked before the construction of the dams. These thought-provoking points lead the audience to reflect on the dynamics around grassroots populist counter-movements and how to balance social demands with nature protection and new legal figures such as rights of nature.

Finally, Dr. Lena Hommes presented her recently defended PhD dissertation “Infrastructure Lives”, which studied water and territorial transformations in Turkey, Peru, and Spain. Dr Hommes analysed how material and symbolic identities shape political processes and contestations around dam construction and removal. An essential element within her analysis is how imaginaries evolve through the different time stages of infrastructure: design, development, and removal. In this regard, defining when infrastructure is obsolete has become a contested issue, as exemplified by the Torranes dam case. Although the dam was no longer producing energy, local irrigators used it for irrigating their orchards. For them, this infrastructure was still alive. As with the case of the Sélune river, the social resistance against dam removal in Torranes highlights how debates around water infrastructures embody broader societal discussions on legitimacy and social justice: What are the vested interests in maintaining or removing a dam? Who decides the prevalence of environmental values over cultural ones? Who has the legitimacy to decide what nature is worth protecting? How do we overcome nature-society binaries?

The closing discussion between the PhD researchers and the speakers revolved around how to re-think nature-society relations overcoming the myths of utopian development on the one hand and pristine nature on the other. Although apparent tensions and contradictions between the so-called red (social) and green (environmental) demands, it is key to consider those aspects as interdependent. Therefore, when criticising mainstream and elitist environmentalism that does not reflect on systematic injustices, we must be careful and “don’t throw the baby out with the bathwater”. For many years, environmentalism movements, especially those led by historically marginalised populations, have called attention to the intersectionality between the environmental crisis and other forms of oppression, such as colonialism, classism, and racism. Besides, factors such as climate change and biodiversity loss made it clear that we need to transform our relationships with ecosystems and other living beings on the planet. A central challenge for our research is to promote future conversations and alliances in that direction: establishing new ways of relating, being, and dreaming of the nexus of nature-technology and society. 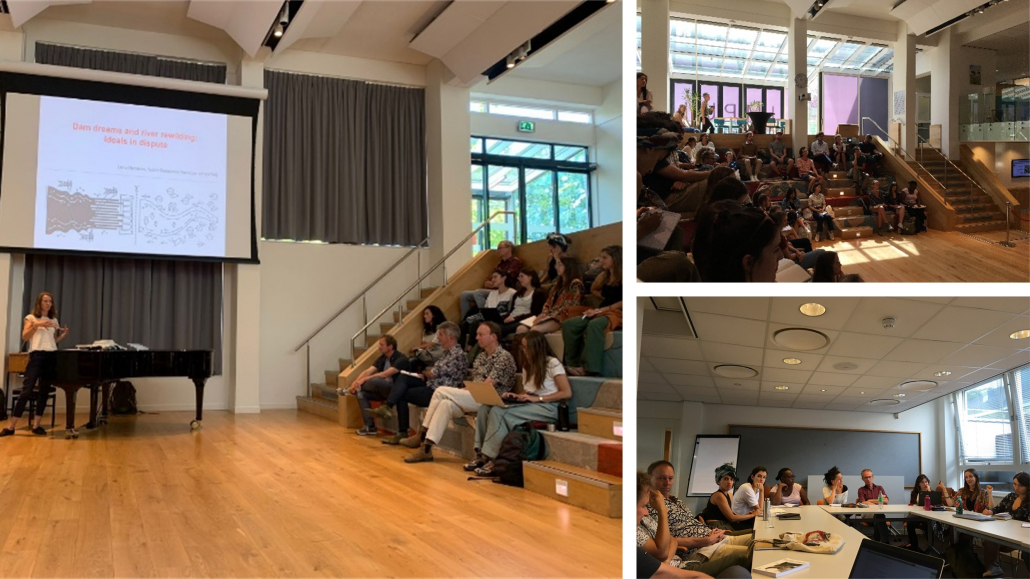 “Commons relations: CONFIANZA” and “A counter geography of water” A debate around “Dams, Rivers and Rewilding Dams”
Scroll to top