EDGES-UBC and Riverhood meeting on “Rivers and Translocal Commoning Struggles”

You are here: Home1 / Events2 / EDGES-UBC and Riverhood meeting on “Rivers and Translocal Commoning Struggles”3

EDGES-UBC and Riverhood meeting on “Rivers and Translocal Commoning Struggles”

On 29 November 2022, the EDGES collaborative at the University of British Columbia in Vancouver, Canada, headed by Prof. Leila Harris, invited Rutgerd Boelens to share and discuss the objectives, concepts, methodologies, and activities of the two transdisciplinary river action-research projects, and in particular, to elaborate on the conceptual framework as laid down in the new Riverhood paper. Leila (who is also Scientific Advisory Board member of River Commons and co-author of the Riverhood article) coordinates EDGES as a collaborative research Lab. The acronym EDGES stands for “Environment & Development: Gender, Equity, and Sustainability”, which are the network’s major themes of research. The notion and meanings of “EDGE” also address the group’s key focuses: cutting-edge research, research supporting marginal and vulnerable populations (women, impoverished, and others at the edges of society), and the need for sharp analysis on core socio-ecological matters that really matter.

After a presentation (entitled “Rivers and Translocal Commoning Struggles. Onto-epistemological arenas and transdisciplinary movements for water justice”), the PhDs, Masters and associated researchers of EDGES discussed with Rutgerd some of the core ideas of the collective paper that just was published (see article: “Riverhood: political ecologies of socionature commoning and translocal struggles for water justice, in The Journal of Peasant Studies, https://doi.org/10.1080/03066150.2022.2120810 ). In brief, the themes that were debated relate to how world’s rivers, though fundamental to social and natural well-being, are profoundly affected by mega-damming and pollution and how, in response, diverse new water justice movements (NWJMs) have emerged worldwide. The latter, as was illustrated by several case illustrations, constitute transdisciplinary coalitions that creatively transform local ideas for ‘enlivening rivers’ into global action and vice versa, fighting for environmental justice. While largely under-theorized, unnoticed by natural and social sciences, excluded from policy-making, the river action-research projects associated with the Riverhood and River Commons projects will study and support evolving NWJMs fighting to revitalize rivers, seeking knowledge co-creation and democratization from the bottom-up.

With EDGES scholars and students, a debate evolved on the central aim of the paper that conceptualized the ‘riverhood’ framework: “learning from and supporting NWJMs and river commoning initiatives” while building on “four interrelated ontologies core to the riverhood concept, situating river socionatures as arenas of material, social and symbolic co-production: ‘river-as-ecosociety’, ‘river-as-territory’; ‘river-as-subject’; and ‘river-as-movement’.”  As many EDGES members work on themes such as Indigenous water governance, water ontologies, non-material dimensions of water insecurity, and using creative and arts-based engagements to reimagine fundamental relationships to water and nature, we closed the meeting with the hope for future networking and engagement with the broader collaborative research efforts. More information on EDGES research and membership can be found here: https://edges.sites.olt.ubc.ca/ 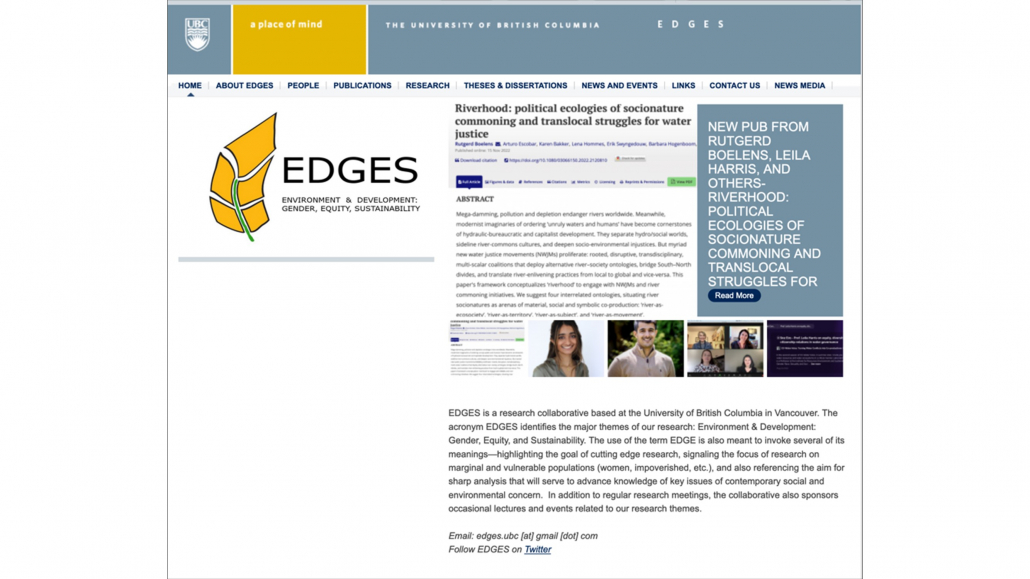 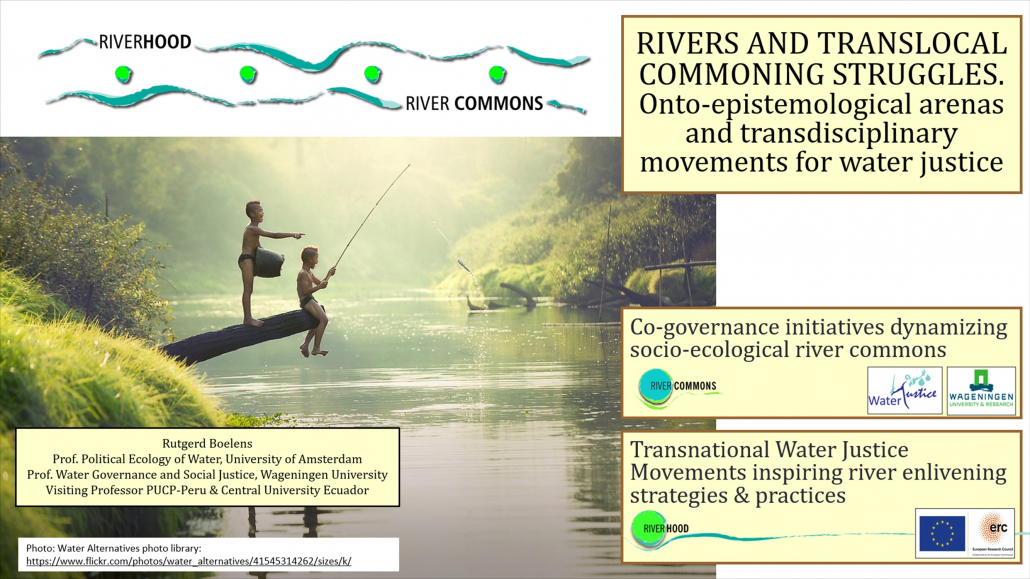