“The unbearable lightness of climate populism” with prof. Erik Swyngedouw

You are here: Home1 / Events2 / “The unbearable lightness of climate populism” with prof. Erik Swyngedouw3

“The unbearable lightness of climate populism” with prof. Erik Swyngedouw

On Thursday, September 22, the Riverhood and River Commons team met for a PhD-Masterclass with Prof. Erik Swyngedouw (Professor of Geography, University of Manchester) at the Grandcafé Loburg in Wageningen. In his talk, prof. Swyngedouw discussed how his life-long interest in processes of politicization —that is, the processes through which we socially organize to change our socio-ecological conditions— led him to interrogate the irreconcilable gap between “knowing” and “acting” in our current climate crisis. How is it that we know so much about climate change, greenhouse emissions, and CO2, and yet our actions don’t seem to lead to the “desired” socio-ecological transformations? Departing from the recognition of this gap, prof. Swyngedouw invited us to reflect on the performative effect of political ecology’s (and other disciplines) critical insights. If, he argued, critical knowledge does not self-evidently translate into transformative action, what are we actually doing? Is it possible that critical theory is subconsciously attached to the very problem it sets itself to solve? Is it possible that we find enjoyment in sustaining the status quo? These thought-provoking questions led to a discussion on the role of critical knowledge in our current socio-ecological crisis. If we —as political ecologists, as activist-researchers— are committed to transforming the plurality of power relations that configure the present socio-ecological conditions, we need to question the belief that knowledge itself will achieve this.

Following this invitation to self-reflect on the articulation between critical knowledge and political transformative action, the discussion posed a few central questions for our current research endeavors: How do we account for the resistance that emerges from those places where the “climate apocalypse” has already happened? How do we shift our vantage point to change the master narrative of the disaster-to-come? What other socio-ecological systems are possible and necessary for us? How do we articulate them? And what are the political imaginaries that could orient “us” to achieve this?

For the second part of his visit, prof. Swyngedouw presented the public conference “The unbearable lightness of climate populism (the depoliticization of the environment)” based on a homonymous recently published paper. Mobilizing a Lacanian psychoanalytical perspective to address what he calls “climate populism”, prof. Swyngedouw posed a series of critical arguments around the current climate discourses. Grouped around the consensus that the climate emergency is the utmost urgent problem of our times, these discourses — both mainstream and radical, left and right— are also trapped within the cognitive dissonance between “knowing” and “acting”. Considered “too big or too threatening to be symbolically articulated” (Swyngedouw, p.2), our current socio-ecological crisis leads to the displacement of our desire to build a politically egalitarian, ecologically sensible and socially inclusive world into a manageable “small” entity called CO2. In this sense, CO2 operates as a “fetish object”. It allows us to deny the Real problem, and build fantasies, apocalyptic future scenarios and promises around it (“We need to tackle CO2, and then everything will be solved”), that then mobilize a complex apparatus of techno-managerial solutions to address “the problem”.

Discussing the four forms of discourse through which such climate populism and techno-managerial apparatus are structured, opened up new interrogations on our role as critical and politically committed activist-researchers. Revolving around the Master-discourse that frames climate change as a problem-to-come for which there is an existing solution within the current structural parameters, our “hysterical” critical discourse requires self-scrutiny. According to prof. Swyngedouw’s analysis, even if we are invested in questioning, criticizing, and uncovering the Master’s narratives’ mechanisms, we are also potentially reproducing “the existing power configurations that produced the problem in the first place” (Swyngedouw, p.14).

This conversation motivated additional pressing questions for our riverine investigations: How do we learn, then, from the failures and limitations of critical theory to overcome the Master-discourse, the fetishization of CO2, and climate-apocalyptic narratives? How do we undertake our research from the acknowledgment that the climate catastrophe has already happened? How do we re-politicize our imaginaries to open up “different political-ecological trajectories” (Swyngedouw, p.15)? 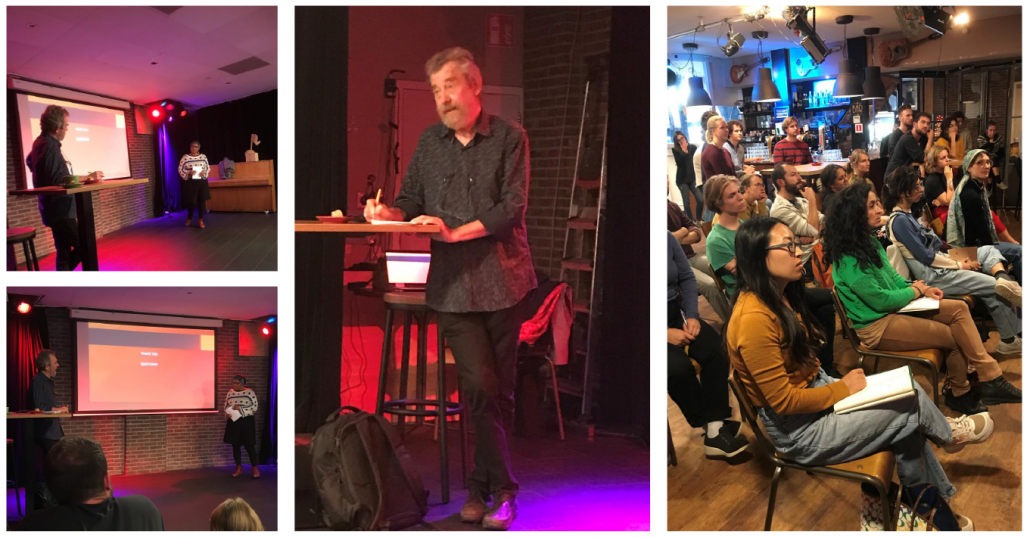