The notion “riverhood” is a mid-19th century almost forgotten concept: “the state of being a river” (Oxford Dictionary). It expresses how different (formal and vernacular) cultures imagine, define, build and live with rivers as socionatural systems. Rivers as part of society, and vice versa. Rivers as an arena of (contested) co-production among humans and non-humans.

In the past decade, in the global South and North, a wide variety of new water justice movements (NWJM) have emerged. NWJMs are transdisciplinary, multi-actor and multi-scalar coalitions that challenge dominant river management approaches. They deploy a multitude of profoundly innovative strategies to restore or defend “living rivers”. A few examples are ecological flow clinics, the promotion of dam removals; federations designing new rules for shared catchment governance; citizens’ initiatives erecting river environmental health projects; and grassroots thinktanks. These NWJMs have the potential to revolutionize environmental debates, practices, laws and policies towards new, equitable and nature-rooted water governance. However, they are often excluded from policy and also academia has so far paid very little attention to them. Tools for understanding the emerging innovative river ontologies, normative frameworks, and commoning strategies are missing. Riverhood, thereto, aims to study, understand and support NWJMs, thereby contributing to more equitable, nature-entwined water governance.

Riverhood will entwine new conceptual debates as Rights of Nature with frameworks that have been recently developed (e.g., on water justice and hydrosocial territories) to elaborate on new ones. In particular, rivers will be theorized through four dimensions and the new cross-scientific field of “riverhood” will be developed.

The project’s central question is: How do the new water justice movements shape and dynamize riverhood enlivening strategies, institutions and practices, and how can they potentiate radically new scientific and policy approaches for sustainable and equitable water governance?

In order to investigate the central question of the project and pursue its objectives, PhD researchers together with local stakeholders will work on eight cases studies in Europe (Netherlands and Spain) and Latin America (Ecuador and Colombia). You can find more information here.

In the course of the project, Environmental Justice Labs (EJLs) will be developed and employed. EJLs will bring together riverine communities, artists, researchers, activists, and policy-makers to co-investigate and co-produce concepts, strategies and cross-cultural knowledge that express innovative practices, scientific insights, and creative policy potentials. 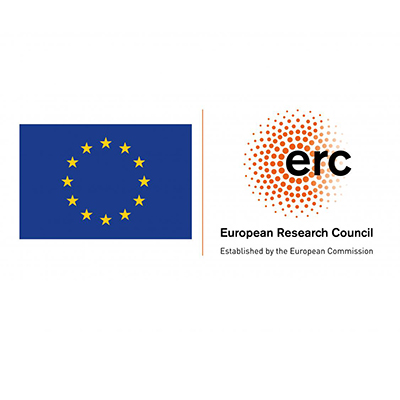 The Riverhood project includes eight cases studies in Europe (Netherlands and Spain) and Latin America (Ecuador and Colombia). Both in The Netherlands and in Spain, mega-hydraulic development to control water and society at once, have a long tradition. Both countries have deeply influenced mechanistic water control paradigms and river basin transformations in Latin America up to these days. However, the pendulum may now swing back, with a different society-nature approach. Ecuador’s new Constitution has adopted “Rights of Nature” as claimed for by its citizens, and in Colombia rivers have become subjects, not objects, of law and societal platforms. European new water justice movements (NWJM) ask for mutual learning with their Latin American forerunner peers’ concepts and experiences. Both aim to creatively translate these notions in new hybrid riverhood approaches, considering contextual similarities, differences and opportunities.

Browse the research projects below:

The central activities of Riverhood include:

Environmental Justice Labs
The aim of the Environmental Justice Labs (EJLs) is to exchange experiences, create new ideas and concepts, and develop action proposals and site-specific interventions through learning-based partnerships between river communities, artists, researchers, activists, and policy-makers. This will be done through on-the-ground activities, local, national and international meetings, as well as through virtual tools and an international interactive platform. Besides developing EJLs in each case study site, interaction among EJLs will be also facilitated to enable a continuous cross-case and multi-scale engagement and learning.

Integration and dissemination
Integration and comparison of insights from the different case studies, as well as dissemination of findings through scientific articles, movies, policy papers, this website and others, will be done by the project staff and postdoc researchers throughout the project. You can find all outputs under the tab publications. 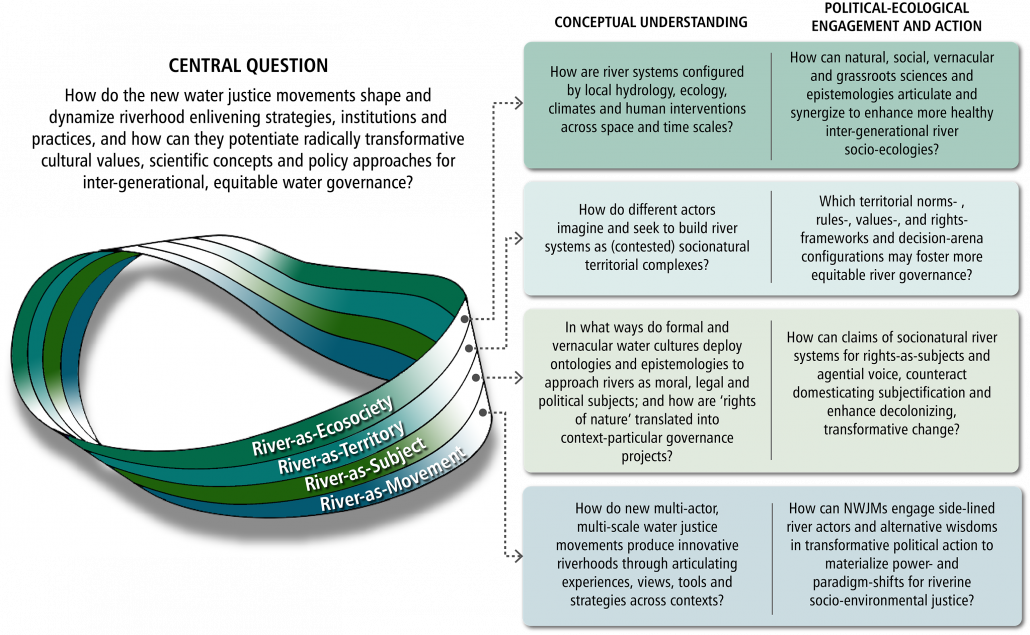 World’s rivers are fundamental to social and natural well-being but profoundly affected by mega-damming and pollution. In response to top-down and technocratic approaches, in many places, riverine communities practice forms of ‘river co-governance’, integrating ecological, cultural, political, economic and technological dimensions. In addition, new water justice movements (NWJMs) have emerged worldwide to creatively transform local ideas for ‘enlivening rivers’ into global action and vice versa. The Summer School aimed to provide PhD students who conduct research on these ‘river commons’ and NWJMs with transdisciplinary concepts and approaches for studying their emerging ideas, concepts, proposals and strategies. The different sessions thereby focused on conceptualizing river systems in all senses, and capacity-building for (understanding and supporting) river knowledge co-creation and democratisation from the bottom up. Click here to download the Summer School Report.

ABSTRACT: Infrastructures and their roles and connections to and in territories and territorialization processes have increasingly become objects of study in political geography scholarship. In this contribution, we build on these emerging insights and advance them by further conceptually disentangling the agential role of infrastructure. We bring together the notions of territory, governmentality, imaginaries and subjectivities, to clarify how exactly hydraulic infrastructure acts to transform relations between space, people and materiality. We start by introducing territorialization as a process of ‘ordering things’ in a certain space and time through different techniques of government. We then show how, at the base of such territorialization processes, are imaginaries that contain normative ideas about how space and socio-territorial relations should be ordered. Imaginaries are consequently materialized through hydraulic infrastructure through the inscription of morals, values and norms in infrastructure design, construction and operation. This set of materialities and relations embedded in infrastructure brings changes to the existing relations between space, water and people. In particular, we highlight the repercussions of infrastructure for how people understand and relate to each other, the environment, water, technology and space: in other words, how subjectivities change as an effect of hydraulic infrastructure constitution. Last, we show how infrastructure and the related hydrosocial territories that develop around it are a dynamic arena of contestation and transformation. We argue that socio-material fractures, emerging counter-imaginaries and the disruptive capacities of subjectivities constantly challenge the ‘fixes’ that infrastructures aim to inscribe in hydrosocial territories. Throughout the paper, we use empirical examples from recent research on hydraulic infrastructure and territorial transformations to ground the conceptual ideas. 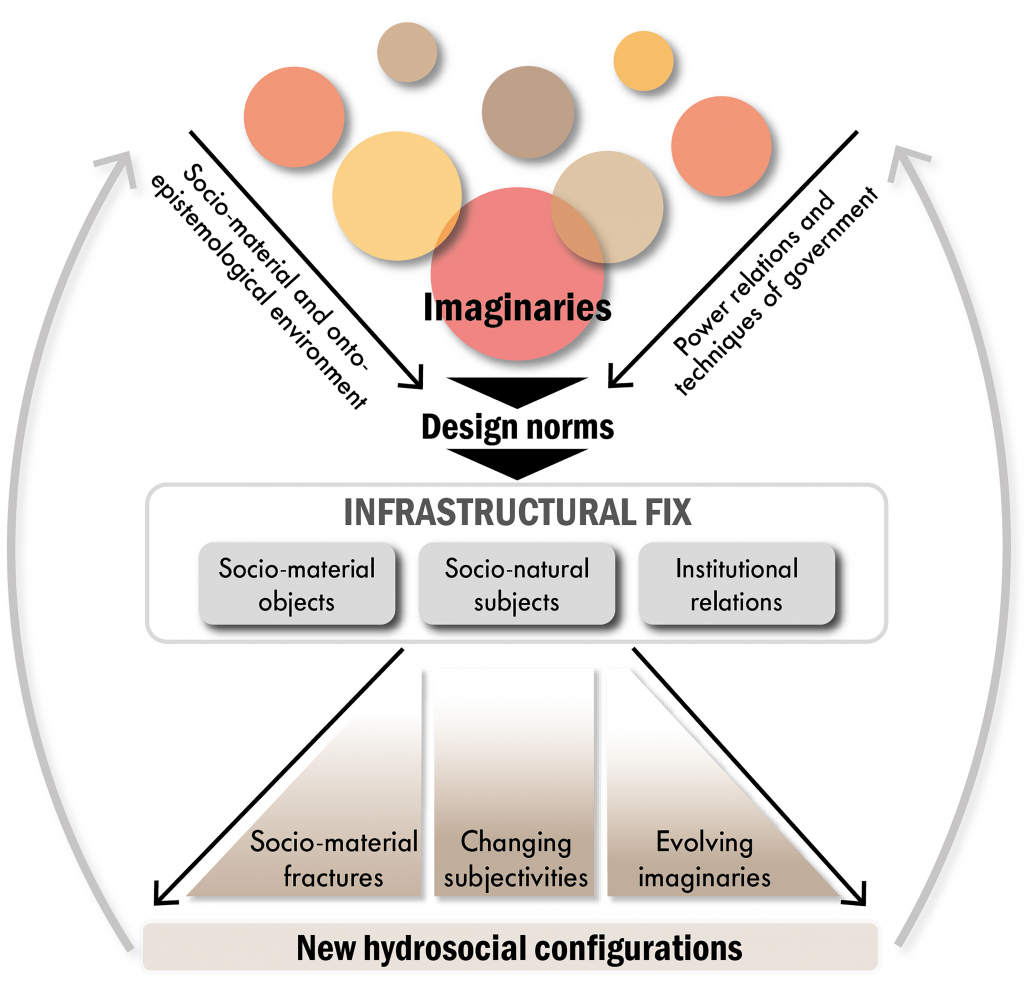 ABSTRACT: This article analyzes how smallholders of Subtanjalla, in coastal Peru, conceive irrigation water as a central element and carrier of hydrosocial relations and territories. We base our analysis on an exploration of the local notions of agua nueva and yocle. These two notions bind together time, space, nature and culture into specific understandings of territorial connections and reciprocities. Through these understandings water is much more than H2O. Instead of just representing an economic good or a material input for irrigated agriculture water is seen as a binding element that bridges and brings together the Andean world with that of Subtanjalla in the Peruvian coast. Water is, from this perspective, a lively and always in-the-making composition of humans, non-humans, and more-than-humans in which there is no clear distinction between nature and culture, past and present, object and subject. We argue that water as an assemblage opens up now lines of inquiry into hydrosocial territories and relations across time and space through the departure of a fundamentally relational understandings of water, its use and governance. 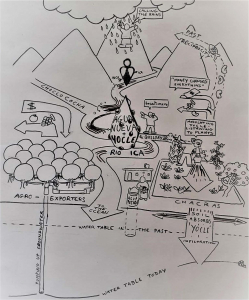 Artists impression of the assemblages that compose agua nueva and yocle in a specific hydrosocial territory (drawn by Maarten Loopmans).

This book builds a comparative and analytical narrative with a historical basis on the modernist utopian thought that shapes hydroterritorial planning policies in Colombia and Spain. At the same time, it highlights contemporary dystopias and analyses the role of social movements in protecting their rights and reviving the flow of rivers and their territories. The book is the result of Bibiana’s Ph.D. research. It’s available at Ríos, utopías y movimientos sociales – Editorial Abya Yala 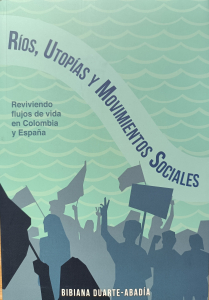 ABSTRACT: The Magdalena River, Colombia’s main river backbone, features multiple tensions and socio-environmental conflicts. They manifest themselves in the river’s ecological degradation and negatively impact the riparian communities and artisanal fishermen, whose productive activities and rights of access to water are restricted. For these communities, the river is a means of passing down and exchanging knowledge between generations. However, their knowledge and practices are not recognized in the dominant governance processes over the Magdalena River. In an interview with Juan Carlos Gutiérrez-Camargo, environmental activist, researcher and companion of artisanal fishermen, we illustrate the universe of epistemologies and worldviews of these communities. We discuss, from a legal-pluralism perspective, the contradictions between state norms and authorities, parastatal powers, and the customary rights of fishing communities. We analyze how the simultaneous presence of various authorities and the complex, unequal arena of legal, extra-legal and illegal forces, hinders enforcement of fishermen’s customary socio-legal repertoires and also of the Colombian Constitution to protect riverside communities’ human rights. The interview reflects on the great complexity of exercising community leadership, environmental protection and defense of artisanal fishing in the midst of a socio-normative political arena permeated by state abandonment and paramilitary violence. For this reason, the interview stresses the importance of recognizing artisanal fisher collectives as political subjects in river co-governance. It also highlights the ambivalent implications of granting rights to nature and rivers: their meaning, functions and impact depend on their political trajectory and mobilization by grassrooted collectives. Finally, Gutiérrez proposes strengthening knowledge networks to bolster river co-governance where the political-cultural and socio-normative frameworks of riverside communities play a preponderant role.

ABSTRACT: This chapter uses a political ecology approach to examine how large dams and megahydraulic infrastructure in many parts of the world dispossess smallholder families and communities of their water and water rights, transforming and disintegrating territories environmentally and socially. It deploys the notion of ‘hydraulic property creation’ to look at the relationships among hydraulic infrastructure development and changing water rights frameworks. It contrasts mega-hydraulic projects that separate designer-builder and user worlds, and user-developed hydraulic systems. It presents important points of attention for more people- and nature-inclusive water governance and hydraulic intervention projects that build on social and environmental justice.

Find here in the future multimedia from the Riverhood project.